This year One Billion Rising (the global campaign for an end to violence against women and for gender equality) is going to be supporting the February 14th Annual Women's Memorial Marches and will be spotlighting the crisis of missing and murdered Indigenous women across Canada.

Please signs and banners about the missing and murdered women only.

Tokens will be available at the rally.

According to research conducted by the Native Women Association of Canada (NWAC) under the Sisters In Spirit Program, over 600 Indigenous women have been murdered or gone missing, most of them over the last 30 years.

Despite clear evidence that this is an ongoing issue, the federal government decided in the fall of 2010 to end funding to Sisters in Spirit. Instead monies in the amount of $10 million have been dedicated to a central RCMP missing person centre. The same institution - who, along with the Vancouver Police Department, failed to properly investigate Pickton in 1997 - was at the centre of a public inquiry in Vancouver. The sham inquiry into the failed Pickton investigation has since been completed with no consequences for any guilty parties and was boycotted by 20 of the 21 groups who were granted standing due to the denial of adequate funding for legal defense.

Pickton, who was convicted for six murders, has admitted to killing 49 women. A total of 18 murders occurred after he was arrested and released for the attempted murder of a sex worker in 1997. This is blood on police hands, yet RCMP officers testifying at the sham inquiry state “there are few things they would change about how they did their work.”

It should come as no surprise that the Committee to End Discrimination Against Women at the United Nations has accepted submissions put forward by advocates of Vancouver's Downtown Eastside (DTES) as well as the Native Women's Association of Canada and announced their intent to launch an inquiry into Canada's missing and murdered Indigenous women.

On February 14th we come together in solidarity with the women who started this vigil over 20 years ago in Vancouver's DTES, and with the marches and rallies that will be taking place across this land. We stand in defense of our lives and to demonstrate against the complicity of the state in the ongoing genocide of Indigenous women and the impunity of state institutions and actors (police, RCMP, coroners' offices, the courts, and an indifferent federal government) that prevents justice for all Indigenous peoples.

List of Feb 14th Memorial Marches in other communities:
http://womensmemorialmarch.wordpress.com/national/ 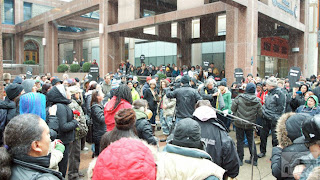 Posted by NoMoreSilence at 8:42 AM No comments: