VIDEOS: The Silence is Broken, But the Violence Continues: Now What? Part II

Here are videos of the four panelists from The Silence is Broken, But the Violence Continues: Now What? Part II event at the Native Women's Resource Centre in Toronto on November 24, 2011. This event was part of Indigenous Sovereignty Week, Toronto 2011.

Posted by NoMoreSilence at 9:49 PM No comments:

Watch for video that will be posted soon!
Posted by NoMoreSilence at 1:15 PM No comments: 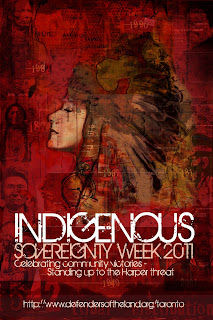 Join Lee Maracle, Darlene Ritchie and No More Silence in talking about the way forward to end the disappearances of Indigenous women!
This event is part of Indigenous Sovereignty week and is part two of a discussion began in the summer:
Posted by NoMoreSilence at 9:42 PM No comments:

VIDEOS: The Silence is Broken, But the Violence Continues: Now What?

Here are videos of the four panelists from The Silence is Broken, But the Violence Continues: Now What? event at the Native Canadian Centre in Toronto on July 20.

Posted by NoMoreSilence at 11:29 AM No comments:

The Silence is Broken, But the Violence Continues: Now What?


Discussion: Where to take our efforts to end the murders and disappearance of Indigenous women/Two Spirit/Trans and a screening of the film: "Survival, Strength, Sisterhood: Power of Women in the Downtown Eastside"

"Survival, Strength, Sisterhood: Power of Women in the Downtown Eastside" is a short film that documents the 20 year history of the annual women's memorial march for missing and murdered women in Vancouver, Coast Salish Territories. By focusing on the voices of women who live, love, and work in the Downtown Eastside this film debunks the sensationalism surrounding a neighbourhood deeply misunderstood, and celebrates the complex and diverse realities of women organizing for justice. (32 mins)
A film by Alejandro Zuluaga and Harsha Walia, based on concept by the Downtown Eastside Power of Women Group. This is a not-for-profit production that is available for free distribution under creative commons license
Panel featuring: Lee Maracle, Darlene Ritchie, Harsha Walia, Native Youth Sexual Health Network, Audrey Huntley (MC)

Hosted by: No More Silence & Toronto Missing and Murdered Women's Committee at the NCCT
Posted by NoMoreSilence at 12:08 PM No comments:

A young mother from Surrey, who dropped her child off with friends last Thursday, and never returned to pick her up, updated her Facebook status this morning.
23-yer-old Nikita Jack reportedly disappeared last Thursday evening, Feb. 10. Her friends, family and police put out a call for anyone who saw the young woman to call Surrey police.
Reportedly Jack was not missing but stuck in Revelstoke B.C.
Today she posted a photo of herself with her boyfriend and a copy of a newspaper article asking for the public’s help in locating her.
She apologized to her family and friends who had been frantically trying to contact by way of Facebook since her disappearance.
Surrey police have confirmed that she has been located safe. No other information was provided.
Posted by NoMoreSilence at 11:49 AM No comments:

Please go to the link to read the interview and see the pics:

And thanks to everyone who came out in support!!
Posted by NoMoreSilence at 2:17 PM No comments:

Toronto’s 6th Annual Rally & March
for Missing & Murdered Indigenous Women
Monday, February 14, 2011 @ **5 pm** (NOTE THE NEW TIME)
Rally at Police HQ, 40 College St at Bay
March to the Coroner’s Office, 26 Grenville St.
Followed by gathering & food @ The Meeting Place, Queen & Bathurst (nw corner)
Food prepared & provided by The Centre for Women and Trans People (UT)
A bus will be available to transport participants from the Coroner’s Office to the gathering.
TTC tokens will be available for those attending by public transit
The bus is not wheelchair accessible, but the Meeting Place is.
According to research conducted under the Native Women Association of Canada’s (NWAC) Sisters in Spirit project, over 580 Indigenous women have been murdered or gone missing, most of them over the last 30 years.  Despite the clear evidence that this is an ongoing issue, the federal government decided in Fall of 2010 to end funding to Sisters in Spirit.  In a move to detract attention from this cut, Rona Ambrose (Federal Minister for Status of Women) announced a $10 million fund to be put primarily towards creating a central RCMP missing person centre.  It is evident that few of those in power have a genuine interest in ending the violence against Indigenous women.  On February 14th, we come together in solidarity with the women who started this vigil in the Downtown Eastside of Vancouver, and with the marches and rallies that will be taking place across this land.  We stand in defense of our lives and to demonstrate against the complicity of the state in the ongoing genocide of Indigenous women and the impunity of state institutions and actors (police, RCMP, coroners’ offices, the courts, and an indifferent federal government) that prevents justice for all Indigenous Peoples.
This event is organized by No More Silence, part of an inter/national network to support the work being done by activists, academics, researchers, agencies and communities to stop the murders and disappearances of Indigenous women.
Besides the Toronto rally, marches and other events will take place in Vancouver, Edmonton, Calgary, Saskatoon, Winnipeg, London (Ontario), and Ottawa.
Endorsed by: Sistering, The Women and Gender Studies Institute (University of Toronto), No One is Illegal Toronto, Indigenous Education Network (University of Toronto), Canadian Chiapanecas Justice for Women, Parkdale Activity and Recreation Centre (PARC), Springtide Resources Inc. Ending Violence Against Women, Anduhyaun Shelter, ShelterlSanctuarylStatus Campaign, Assaulted Women's and Children's Counsellor/Advocate Program (George Brown College), Christian Peacemaker Teams - Aboriginal Justice, Indigenous Sovereignty and Solidarity Network (Toronto), First Nations Solidarity Working Group, CAW-Sam Gindin Chair in Social Justice and Democracy (Ryerson University), Women and Gender Studies Student Union (University of Toronto), Coalition Against Israeli Apartheid (CAIA), Centre for Women and Trans People (University of Toronto), UN Women - Canada, Ryerson Students' Union, The Redwood, OCAP.

To add your organization's name to this list of endorsers, email:
nomoresilenceorg@gmail.com
Posted by NoMoreSilence at 12:02 PM No comments:

Remembering Our Sisters
On February 3rd, the Centre for Integrative Anti-racism Studies (CIARS at OISE/UT), with the support of No More Silence, will screen short docs on missing and murdered Indigenous women in preparation for February 14th when rallies and memorial marches will take place across the country.

Screening work by director/producer Audrey Huntley including “A New Day” produced for CTV First Story in Vancouver's Downtown Eastside - the piece looks at the tragic death of 22 year old Ashley Mischiskinic in mid September. Community members believe she was thrown out of the window of the 5th floor of the Regent Hotel by drug dealers as punishment for a drug debt and to send a message and warning to the community. Residents were outraged when police initially closed the investigation declaring her death a suicide on the same day. Huntley interviews members of the February 14th Women's Memorial March organizing committee looking at the bigger picture and their quest to end the violence. The screening will be followed by a skype Q & A with Vancouver activists and DTES residents.
Sponsored by: Centre for Integrative Anti-racism Studies, CIARS at OISE/UT
Posted by NoMoreSilence at 8:18 PM No comments: